No, no, this post has nothing to do with the burning of Apple Computers in Japan as reported in this WSJ story.

I am talking about Apple Daily, one of the most popular local paper here in Hong Kong.

From what I know the circulation of the paper has dropped in recent years (which paper hasn't?), and the paper has tried very hard to reinvent itself in order to lift sales.

The current management seems to think that the right way to reengineer the company and make it more innovative is to move people around (similar to the job rotation practice found in Japanese manufacturers like Toyota) and to get rid of those who are resistance to change (or considered to be old-fashion whatever that means). On top of that, you get a dose of authoritative management as well with the boss himself involving in most of the day-to-day operations. Should that be the way forward?

The short answer is: Nobody knows at this moment. Eventually market test will provide us with the answer.

But from an economic point of view, one can offer two observations:

1) Unless a culture of constant innovation is instilled into the operating routines of the organization when it is first created/composed, it is dubious that simply by moving people around internally, getting rid of some old staff and recruiting new ones will help transform an organization which lacks the "innovative genes/routines" into a more innovative one.

2) The heavy involvement of the boss in daily operations reminds me of central planning...how can one person presumably has all the relevant knowledge to make all those necessary decisions? The boss at Apple Daily is supposedly a follower of F. Hayek. How come he seems to forget the main lessons that are found in one of Hayek's monumental pieces "The Use of Knowledge in Society"?
張貼者： Gary M C Shiu 於 8:38 PM No comments:

Will This Guy be the Next US President? 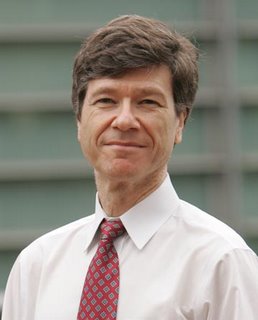 Does he have a good looking face for the next US president? Apparently some US folks do...

Does he have the right credentials...well may be...

Thanks to Alex at Marginal Revolution for the pointer.
張貼者： Gary M C Shiu 於 6:19 PM No comments:

Walmart, a post child of what a market economy could deliver for the benefits of many, has now got a Communist Party branch set up in one of its China outlets. What a funny combination!

Your Personal Liberty or Your Life

Dick Posner weighed in on the ruling that the National Security Agency's conduct of electronic surveillance outside the boundaries of the Foreign Intelligence Act is illegal in WSJ. Here is the link.
張貼者： Gary M C Shiu 於 9:13 PM No comments:

Here is the link.

"Will they all agree with everything Greif says? Perhaps not, but they will have to take him seriously, because his book represents the cutting edge when it comes to the study of institutions. Some readers may perhaps want more quantitative evidence, but they will have to admit that Greif's analytic histories are quite persuasive, and they will have to acknowledge too that appropriate econometric testing of the sort of game theoretical models Greif uses is still in its infancy. Other readers may worry that the historical evidence is perhaps consistent with different game theoretical equilibria and thus with different treatments of Greif's examples. They can certainly make their case, but in the end their accounts are likely to end up complementing Greif's analysis, rather than being a substitute for it."
張貼者： Gary M C Shiu 於 9:18 PM No comments: