The Funniest Line I have Read Today

"Economic development does wonders for peace, but what does microfinanced entrepreneurship really do for economic development? Can turning more beggars into basket weavers make Bangladesh less of a, well, basket case?"

Columbia Business School professor Amar Bhide questioned the use of microfinance as a tool to lift poor country people out of poverty. Read the story here.
張貼者： Gary M C Shiu 於 12:54 AM No comments:

Best Line I have Read Today

"People don't come here because they like Singapore--they come because the returns are better."

Arnold Kling up at Econlog has cited an article in Milken Institute Review regarding the weakness of China's economic system (actually the article also touches on India's financial system but I do not think I know enough about India's system to comment on it).

According to the study:

"China’s financial system makes poor use of its captive pool of savings. Partially or wholly state-owned companies absorb 73 percent of bank loans, even though their average productivity is just half that of private companies. The private sector now produces more than half of China’s GDP, but get just 27 percent of the bank credit."

1) Loans that are granted to state-owned enterprises (SOE) are not necessarily used by the SOEs themselves. Often these loans are re-lent to private sector enterprises. Hence, using loans granted to SOEs as a proxy of the degree of state-dominance in the area of credit overstates the importance of state borrowers.

2) Many alternative financing arrangements have emerged in China in recent years to meet the financial needs of private-sector firms. Some of these informal financial institutions are documented in Kellee Tsai's excellent Back Alley Banking. Again just looking at the numbers on loans granted to SOE by banks overstates the important of state borrowers as people in China with money to save are no longer limited to park their funds with formal financial institutions which are mainly state-owned.
張貼者： Gary M C Shiu 於 9:13 PM No comments:

The NYT has a story on Harvard economist Dani Rodrik. And he has this bit to say about China:

"The Chinese government operated on several levels as that nation grew into an export powerhouse, Mr. Rodrik said. It nurtured the manufacture of electronic products and auto parts. It forced foreign investors into joint ventures with domestic producers. Beijing lowered trade barriers, he said, “only after it developed a relatively sophisticated manufacturing capacity.”

Absent an activist policy to protect China’s nascent industries, it would not have emerged as an export power, Mr. Rodrik said. “The traditional forces of comparative advantage,” he said, “would have pushed China to specialize only in the labor-intensive products ‘appropriate’ to low-income economies.”"
張貼者： Gary M C Shiu 於 12:15 AM No comments:


According to a study conducted by an Australian scholar at Monash reported in today's edition of SCMP,

This is not surprising as a lot of people in HK have lamented at the declining English standard of university graduates before. What is really shocking is this bit:

"Data collated from immigration tests carried out when the graduates applied for permanent residency visas showed 42.9 per cent of the Hong Kong students failed the language competency tests, only slightly better than the 43.2 per cent from the mainland who failed it."

The rate of improvement in Chinese students' language ability is really amazing. One has to remember that presumably English is taught at school only after reform started in 1978. Funny thing is HK is trying very hard to position itself as China's premier international financial center, but how they are going to do this with waning English ability?

Read the whole story here. Of course, Monash is also the institution where my good friend Stephen Miller teaches. And you can read Steve's latest work on how investors can hedge against country risks with financial assets here. BTW, Steve is a big fan of Fischer Black.
張貼者： Gary M C Shiu 於 5:28 PM No comments:

"During Japan's economic boom, Tokyo showered enormous subsidies on Yubari to build these huge though poorly thought-out tourist attractions, which drew few visitors, ran large deficits and saddled this city of 12,828 inhabitants with more than $500 million in debt.

At first it was a convenient arrangement: the hinterlands prospered, politically connected contractors had plenty of work and the government cemented the loyalty of rural voters. But the good times ended in the 1990s, and the government slowly closed the financial spigots, leaving Yubari and other rural cities increasingly desperate."

Nobel Laureate Mike Spence has a piece on today's WSJ offering his view of why China grows so fast. Here is the first part, and the next one would appear in tomorrow's edition.
張貼者： Gary M C Shiu 於 12:59 AM No comments:

Other than the textbook he wrote decades ago, which I had read as an undergraduate student and the content of which I have forgotten long ago, the excitment I got when I read this book while at graduate school is still with me till this day.

David Warsh on Musgrave; and here you can hear a debate between Jim Buchanan and Musgrave on public finance and public choice.
張貼者： Gary M C Shiu 於 10:23 PM No comments:

Milton Friedman on China and India

In an e-mail interview with WSJ in July last year, Milton Friedman spoke on China and India:

Any thoughts on a China versus India comparison?

Friedman: Yes. Note the contrast. China has maintained political and human collectivism while gradually freeing the economic market. This has so far been very successful but is heading for a clash, since economic freedom and political collectivism are not compatible. India maintained political democracy while running a collectivist economy. It is now unwinding the latter, which will strengthen freedom of all kinds, so in that respect it is in a better position than China.

Is economic freedom really incompatible with political collectivism? What about Singapore? Singapore has maintained its economic freedom and political collectivism for decades and I have said something to the effect that this two features could not stand side by side forever before. It might still happen. But I am now far less confident in this prediction's ability (or is it simply our belief?!) to foretell what is going to happen in that country than before.

Despite much advancement in our knowledge of political economy, we still know very little on how political and economic institutions co-evolve.
張貼者： Gary M C Shiu 於 12:34 AM No comments:

Two college students in the US chat over lunch.

Student B: Nothing. What about you?

Student A: I am getting a bit confused about this whole Hillary Clinton running for the 2008 presidency thing.

Student B: Why do you say that?

Student A: I thought she was already calling the shots back in those days when Bill was the president...

Here is NYT story on Hillary Clinton's annoucement of her decision to run in 2008.
張貼者： Gary M C Shiu 於 7:12 PM No comments:

A Master of Socialist Economies Shares His Thoughts and Reflections

Retired Harvard professor J. Kornai's intellectual biography is just out. A sample chapter is available here. And yes, there is more content in the book than an elaborate exposition of the concept of soft budget constraint.
張貼者： Gary M C Shiu 於 12:46 AM No comments:

Ideas matter, yeah, we know it.

Well, you see, when a large number of people who once view capitalist as evil and business as an expression of greed start seeing business and trade as a legitimate way to earn a living, that place presumably has a good chance of experiencing rapid growth.

How can we tell whether a place is ready for that? Any indicator we can use as a guage for that shift in sentiment on the part of the public.

One way to do this may be to take a look at the roles capitalists and businessmen play in the movies produced there. If such were indeed the case, one might want to start betting money on India. Read more here.
張貼者： Gary M C Shiu 於 12:33 AM No comments:

"Here, I offer a new explanation for the salary
gap between mathematicians and economists:
many economists are hired to justify a viewpoint.
In contrast, I have never heard of mathematicians
who proved a theorem to satisfy their
masters." 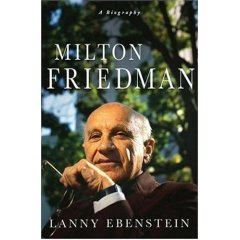 After serving us with a wonderful biography on Hayek, Alan Ebenstein did it again with a new book on champion of personal liberty Milton Friedman.
張貼者： Gary M C Shiu 於 10:16 PM No comments:

1. Diane Coyle's new book The Soulful Science: What Economists Really Do and Why It Matters. Read a sampe chapter here.

3. The Law-Growth Nexus: The Rule of Law and Economic Development by Kenneth Dam.
張貼者： Gary M C Shiu 於 8:44 AM No comments: 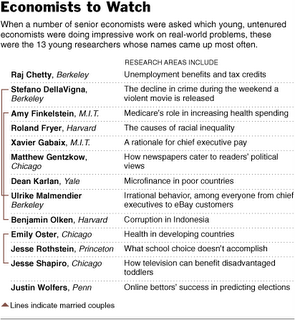 There is a very good story in today's NYT on the creative work done by a younger generation of economists.

It's simple according to R. Preston McAfee

"[T]he most important reason for China's success: China ignored the advice of Harvard economists, Russia did not".

China Is Not the Only Anomaly

Arnold Kling up at Econlog wrote:

"Like many commenters on my earlier post, I raise the issue of whether China is an anomaly, because of its relatively high level of economic competitiveness and low level of political competitiveness. I can see three possible outcomes:

1. China continued to open up and develop economically, while remaining a one-party state politically. This would tend to discredit NWW's paper.

2. China undergoes a transition to an open-access order, so that over the next 20 years genuine political competition emerges.

3. To retain power, China's leaders maintain control over the access to capital in the economy. Eventually, a system of centralization and government favoritism leads to economic stagnation before China achieves full economic development."

But China is not the only anomaly in that a rapid growing economy coexists with a close political system. Singapore is another example.

While scenarios 1 and 2 seem plausible, scenario 3 is unlikely because of the continuation of China's financial market liberalization. Pressure for China to continue to do so partially comes from China's obligation to open its financial sector under its WTO commitment.

A more interesting question to me than venturing a guess on how things in China would unfold 30 or 40 years from now is how it got here in the first place.
張貼者： Gary M C Shiu 於 7:44 PM No comments:

Learn Austrian Economics Through the Web!

Here's Mario Rizzo's freshly minted website with links to some of his scholarly work.

Websites of Larry White and George Selgin if you want to learn more about what Austrians have to say on monetary theory and monetary history.

Roger Garrison's site would provide you with a wealth of info on how Austrian macroeconomics differs from other schools of thought.
張貼者： Gary M C Shiu 於 7:45 PM No comments: