And given her punishing and hectic schedule, I would imagine she would be more inclined to bring a copy of Tuesday with Morris with her on a business trip rather than Hayek's Constitution of Liberty. So I doubt she has that much time to beef up her general knowledge after graduation.

Or May be I am totally wrong, may be an author no longer needs to check her facts and even logic so long as her work is able to attract readers. May be her writing style, which appeals to readers' emotional response instead of their intellect, is exactly what readers are after these days.


三年前肥佬黎對我說: Gary, 你不用在文章內講邏輯說道理，光駡人就行。
我答: I do not know how to write a piece without an argument.

Who Did the Marking? 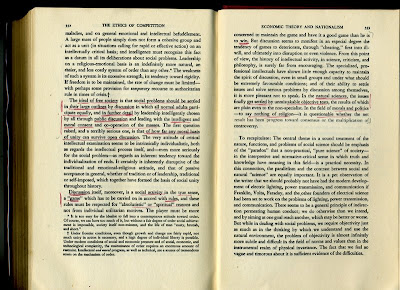 The book you see above is Frank Knight's Ethics of Competition. Guess who left the marking in the above book?

Hint: A renown professor famous for his work on justice. HT to Adam Smith Lives for the picture.
張貼者： Gary M C Shiu 於 8:34 AM No comments: 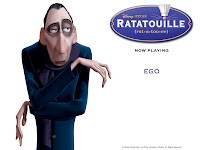 In many ways, the work of a critic is easy.
We risk very little yet enjoy a position over those who offer up their work and their selves to our judgment. We thrive on negative criticism, which is fun to write and to read. But the bitter truth we critics must face is that, in the grand scheme of things, the average piece of junk is more meaningful than our criticism designating it so.
But there are times when a critic truly risks something, and that is in the discovery and defense of the new. Last night, I experienced something new, an extraordinary meal from a singularly unexpected source. To say that both the meal and its maker have challenged my preconceptions is a gross understatement. They have rocked me to my core. In the past, I have made no secret of my disdain for Chef Gusteau's famous motto: Anyone can cook. But I realize that only now do I truly understand what he meant. Not everyone can become a great artist, but a great artist can come from anywhere.
It is difficult to imagine more humble origins than those of the genius now cooking at Gusteau's, who is, in this critic's opinion, nothing less than the finest chef in France. I will be returning to Gusteau's soon, hungry for more.
感謝楊懐康為我提供原文。
張貼者： Gary M C Shiu 於 10:21 PM No comments:

A new paper reevaluates the thesis and concludes:

Our overall conclusion is that the relationship between income and democracy and the widely-accepted modernization hypothesis need to be reevaluated, with much greater emphasis on the underlying factors affecting both variables and the political and economic development path of societies.

Our results indicate that countries have embarked upon different development paths, most likely at some critical junctures during their histories, and while some paths have led to democracy and prosperity, some others involved non-democracy and relative poverty.

Consequently, there is no reason to expect income changes over 5, 10 or even 20 year intervals observed during the post-war era to lead to signifcant changes in regimes above and beyond those experienced by the world as a whole.
張貼者： Gary M C Shiu 於 8:50 PM No comments:

What's New at My Alma Mater?

New faces, many of them.

In case you don't know, one of my former teachers is having an on-going, on-line book forum on his blog, here is the first installment.
張貼者： Gary M C Shiu 於 6:19 PM No comments:

Aid advocacy leads to perhaps an even more serious problem. There is a limited stock of good will and good intentions in the rich world and the question becomes whether this stock is best harnessed by mobilizing more aid, or by pursuing alternative actions that could have a bigger impact.

The Era of Ben Bernanke Has Just Begun!

A couple of days ago, a column in the local paper Hong Kong Economic Times criticized Bernanke for not lowering the Fed Funds rate. You could tell reading through his arguments that the writer lacks knowledge of elementary monetary economics.

So you want to hear what an expert in monetary economics has to say about Ben's latest move to cut the Fed's Discount Rate, read here.
張貼者： Gary M C Shiu 於 6:23 AM No comments:

The Most Intelligent Commentary on Sub-prime "crisis"

Here is the bottomline:

The deeper moral is simple. Financial markets exist to do risky things. The more risk they take, the higher the (expected) returns. You can use regulation to squeeze risk out of a segment of the market, say banks, but you don’t eliminate the risk, you just move it elsewhere. New segments, say hedge funds, emerge to take over the risk and the high (expected) returns that go with it.

The problem is that little is known of the new segment and its players, so the armies of regulators and supervisors that protect us look in the wrong direction because they don’t know where to look. There has been much talk about regulating the hedge funds; it might happen, so the game will move elsewhere.

The post is witty, well written and mostly jargon free. It tackles the sub-prime issue at a conceptual level that is hard to find in your daily paper. No, you won't even find it in your copy of FT or WSJ. Read the whole thing here.
張貼者： Gary M C Shiu 於 6:10 AM No comments:

The Only Blog Post that You Must Read Today

No, no excluding this one of course. What it's about?

Any body worth his salt as an economist SHOULD read it.
張貼者： Gary M C Shiu 於 8:56 AM No comments:

Should I Read This or Not?

Despite heaps of praises piled on Greg Clark's Farewell to Alms, read here and here, David Warsh at Economic Principals begs to differ. His comments are harsh at times.

Mrs Chan said the Government's policy has always been characterised as positive non-interventionism. The Government does not intervene unless it is in the overall public interest to do so. Its involvement in the Cyberport is a natural extension of this process. (My Emphasis)

So You Want to be Rich?

And this is what a reviewer of the book said:

"This short and entertaining book packs a vast amount of serious information about your brain, about your mind, and about your money. You will learn a lot when you read it for the first time and you will probably want to read it again to learn some more."

Puzzle of the Day

My sister in law has a Ph.D. from Cambridge. Whenever she dispenses her opinion, my wife and her parents (my inlaws were both graduates from Peking University back in the late 1950s, no small feat indeed) listen.

It doesn't matter what topic is being discussed, it does not matter that my wife and my inlaws start with different views on the same matter, they will automatically switch side and accept my sister in law's view without hesitation.

And the question is why?

Is it because she has her Ph.D.? But isn't it the case that her Ph.D. only represents her expertise in certain area of study not in all areas.

Is it because the fact that she has got her degree signals to others that she is smart (like higher IQ), so people who have received less education believe that in matters that they are not completely sure how to deal with themselves, it is better to delegate the task of workng out a solution to those who have higher IQ. The presumption is that higher IQ people have a better chance of figuring out the best course of action. Is there any basis on this claim?

Those readers who are knowledgable in neuroscience and psychology, educate me.
張貼者： Gary M C Shiu 於 3:05 AM No comments:

標籤： Things I Do Not Have an Answer

I Wish I Were Him

Although Milton did not prevail in his quest to have the Fed maintain a constant money-growth rate, he did prevail in his insistence that policy be apolitical and rely to the maximum possible extent on market judgments. He lost a battle but truly did win the war.