Chicago Price Theory is Back

I am extremely happy to report that Transaction Press has decided to reprint Milton Friedman's classic Price Theory text as well as Gary Becker's Economic Theory.

To learn more about the origin and development of the Chicago School of Economics, you can't miss this.
張貼者： Gary M C Shiu 於 8:50 PM No comments:

Yet the new research on priming makes it clear that we are not alone in our own consciousness.

We have company, an invisible partner who has strong reactions about the world that don’t always agree with our own, but whose instincts, these studies clearly show, are at least as likely to be helpful, and attentive to others, as they are to be disruptive.

That is from a fascinating story from NYT, more here.

What I would like to know though, is what are the rules of interaction between these conscious and unconscious portions of our mind. How are these rules set in order to guarantee that each part serves our overall interests?
張貼者： Gary M C Shiu 於 11:21 PM No comments:

It is official. Vernon Smith will be leaving in 2008 for Chapman University. Here is a story in LA Times.
張貼者： Gary M C Shiu 於 7:38 PM No comments:

Not that she wants to stay at that damn place, but you need to make a living right, and you have bills to pay as well, what else could you do until you find eh..eh.. another "opportunity". In most likelihood, one is more likely to get a lousy job under such circumstances . That is why I put the word opportunity in parenthesis.

This is what our Chief Executive called the best economic situation in 25 years?

Casual empirism suggests to me that a lot of the late 30s and early 40s crowd somehow feel stuck, they fail to sense that there are opportunities out there waiting for them. Do you guys out there feel the same or is it just me?
張貼者： Gary M C Shiu 於 9:02 PM No comments: 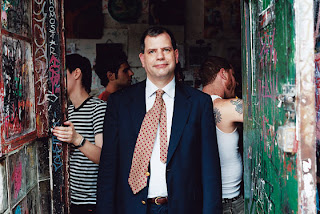 Hal Varian at UC Berkeley is now the Chief Economist at Google, yes you hear it right, Google.

And yes, it is the same Telser who wrote the path-breaking piece "Why Should Manufacturers Want Fair Trade" back in 1960.
張貼者： Gary M C Shiu 於 12:30 AM No comments:

As a colleague of mine once warned: “nobody gets tenure for demonstrating that markets really work.”

Capitalism is talk, talk, and talk all the way down.

As Deirdre McCloskey, a former U. of C. professor, notes, " 'Don't you know that the greatness of the University of Chicago has always rested on the fact that the city of Chicago is so boring that the professors have nothing else to do but to work?' "

You have read or heard a lot about how expropriation of China's rural land for industrial or property development has created social stability problems. For an example, read this.

What is new to me is that the same problem occurs in India as well, a place where the legal system is presumably better developed than China's. This is from today's WSJ:

In recent months, peasant revolts have been flaring up across the country, protesting against industrialization and the land grabs that accompany it. Harnessing the anger of rural poor, Maoist-inspired insurgents roam freely across much of central India, causing Prime Minister Manmohan Singh to call them the largest threat to India's security.

Professor Lui is certainly one of the best minds in this town.
張貼者： Gary M C Shiu 於 9:12 PM No comments:

We find anecdotal evidence suggesting that governments in poor countries have a more left wing rhetoric than those in OECD countries. Thus, it appears that capitalist rhetoric doesn't flow to poor countries. A possible explanation is that corruption, which is more widespread in poor countries, reduces more the electoral appeal of capitalism than that of socialism. The empirical pattern of beliefs within countries is consistent with this explanation: people who perceive corruption to be high in their country are also more likely to lean left ideologically (and to declare support for a more intrusive government in economic matters).

My question is: Does their argument apply with equal force across political regimes? What about China? China scored 3.3 out of a possible 10 in the Trasparency International's Corruption Percetpion index, which was a bit low, yet the place is a foreign capital magnet!

India seems to be a better fit with the authors' claim, a democratic country which scored the same point as China did in Transparency International's Corruption Perception Index, and it attracts far less foreign capital as China does.

Then what about Hong Kong? A lot of Hong Kong people here, including this party, are demanding the government to introduce universal suffrage. Given that Hong Kong has scored high (8.3) in the Transparency International's ranking, does it mean that policies would not be left-leaning even if democracy were in place?

Transparency International's index could be accessed here. HT to Marginal Revolution and Econlog.

A good friend of mine, who is interested in opening a bookstore which combines the best of the virtual and the real world could offer, asks me to do him a favor by posting an ad for his store.

For those interested in getting books which have been recommended in this page, (others as well) at lower prices than Amazon (including shipping costs it charges), please drop me a note. Before he officially launches his store, my friend wants to know how many readers out there actually want to get their own books first.

Sorry at this amount, my friend's store will only serve those readers who live in Hong Kong only.
張貼者： Gary M C Shiu 於 5:16 AM No comments:

In "Two-Sided Markets: A Progress Report," Rochet and Tirole explained the thinking behind the bourgeoning literature as of the end of 2005. "Getting the two sides on board" might be a useful characterization, but it didn't go nearly far enough. "We define a two-sided market as one in which the volume of transactions between end-users depends on the structure and not only on the overall level of the fees charged by the platform."

The two sides' willingness to trade depends on the policies of the platform; its membership (or fixed) fees get them into the tent; its usage (variable) fees condition their enthusiasm once they are there. A favorite example: dating bars, which charge men a stiff fee and let women in for free, making money on the sale of drinks. But in fact the model illuminates matchmaking in everything from portals such as Google and Yahoo, TV networks and newspapers (in which "eyeballs" are the stock-in-trade) to mobile phone networks, personal computers, credit cards and videogames (in which more sophisticated commodities are marketed).

That is from a book review of Catalyst Code, read more here.
張貼者： Gary M C Shiu 於 5:11 AM No comments:

Are There Lessons From Autocracies? 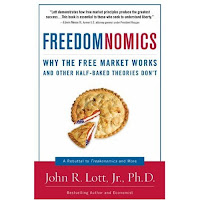 "Mr. Lott offers so many fascinating theories that the "Freedomnomics'" ideas-per-page ratio is more daunting than that of the frothy "Freakonomics," which Mr. Levitt's writing partner, journalist Stephen J. Dubner, optimized to not tax tired travelers' oxygen-deprived brains at 35,000 feet...

Mr. Lott argues that Messrs. Levitt and Mr. Dubner "portray America's free market as a cut-throat environment in which consumers are constantly swindled by so-called experts. Habitually attributing economic anomalies to some kind of scam, the pair don't seem to realize that market forces exist that punish dishonest behavior." This is somewhat overstated — "Freakonomics" is too attention-deficit disordered to have much of a theme beyond promoting Mr. Levitt as a "rogue" genius. Nonetheless, Mr. Lott's chapter on how the market encourages good behavior by penalizing bad reputations is insightful. "

The real puzzle, according to the author, is that:

If the free market is so wonderful, how did "Freakonomics" become the nonfiction publishing sensation of the decade?

"Maybe the book market rewards truth-telling less than helping customers feel good about themselves? To paraphrase the famous quote by Adam Smith about butchers, bakers and brewers with which Mr. Lott launches "Freedomnomics," "It is not from the benevolence of the economist, the journalist, or the publisher that we expect our cheesy bestsellers, but from their regard to their own interest." "

1. The Institutional Foundations of Public Policy in Argentina: A Transactions Cost Approach

2. War, Wine and Taxes by John Nye who would join my almar mater George Mason University this fall.

3. A Farewell to Alms:A Brief Economic History of the World by Gregory Clark.
張貼者： Gary M C Shiu 於 1:47 AM No comments:

Does Poverty Cause Terrorism?

With the identities of the terrorists in the unsuccessful car bombings in England revealed as doctors, people start to have doubts about the conventional wisdom: Does Poverty Cause Terrorism.