No kidding, I am not an expert of Chinese politics, but read this short introduction to communism if you want to know the horrors of implementing socialist "heaven on earth".

Take China's rural socialist experiment as an example. The use of so called production team as a unit of production with pay unrelated to effort (instead, team members are assigned workpoints according to some arbitrary "equitable" criteria) turns out to be a big policy disaster and results in sharp fall in arigultural output.

Who suffers in the end, THE MASSES, not the POLITICAL ELITES on top. Now is that FAIR?

What about corruption, time wasted spending in line to get daily necessities(and mind you only ordinary folks, that means people like YOU AND ME, again not the POLITICAL ELITES are the ones who have to line up for stuff)....Is that fair Mr Lam?
張貼者： Gary M C Shiu 於 7:38 AM 2 comments:

Beginning of the End

This is from Hong Kong Economic Journal's famous columnist 林行止 .

Social Justice? Are you kidding me, Mr Lam? There IS NOT an identity called society which makes economic decisions, and I thought we are over that idea DECADES AGO!
張貼者： Gary M C Shiu 於 7:50 AM 3 comments:

Any Alchian student or fan knows that Armen also had a heavy influence in the training of judges and lawyers through the George Mason Law and Economics Center Program started by Henry Manne. In an important antitrust policy speech, former FTC Chairman Timothy Muris articulates a sentiment I’ve heard repeatedly from those who went through the program or watched Armen teach:
Armen Alchian was unexcelled in teaching economics to lawyers. He often presented economics socratically - a technique familiar to lawyers. For years Armen was one of the most popular instructors in Henry Manne’s programs for teaching economics to lawyers. In short courses, he taught literally hundreds of federal judges and law professors.

That's from Josh Wright, a student of both Ben Klein and Armen and now at George Mason University Law School himself on Armen's 94th birthday. Read more here.
Now that HK is contemplating to have a competition law, I am really curious about the ability of HK judges ability in deciding cases involving some serious econometrics, price theory, game theory and what not. That makes me worried.

May be HK should considering hiring someone like Armen, Demsetz or Josh to offer some economics crashcourses for the local judges?
張貼者： Gary M C Shiu 於 6:07 AM No comments:

Futility of Granting More Power to the Fed

Although plenty of questions are being asked about Secretary Paulson's plan granting sweeping new powers to the Federal Reserve, a crucial one is in danger of being overlooked. That question is: What use has the Fed made of past extensions of its powers? Is it reasonable, given the Fed's record, to expect it to use new powers responsibly?

The answer ought to give plan supporters second thoughts. It is that, whenever the Fed acquired new powers in the past, it abused them, often with dire consequences for the U.S. economy.

身邊年過四十的朋友或家人，事業的發展都不怎麽樣。 They simply get stuck. And I am not even talking about people with minimal education. 他/她們都是留學英美的碩士/博士，讀的也非什麽雜牌大學, 而是在 U of Chicago, HKUST, Purdue University, Indiana University at Bloomington, and University of Minnesota. 情况就如大樂在<<四代香港人>>說的那樣。

How did that happen? 如何釋懷？

As far as I know, most of them simply devote their attention elsewhere instead of their career, like their children and other hobbies or interests. 但我知道他/她們仍不甘心。

In general, I think that the economy's fate hinges on its ability to adapt to changes in relative prices. If there are few large shocks, then full employment will not be disturbed. With large shocks, then people need to respond to incentives to exit some occupations and industries in order to enter others.

My hunch is that with large shocks to the economy, people start to panic as uncertainty looms. Instead of figuring out ways to respond to massive shifts in relative prices (that's what large shocks mean to me anyway), people's brain is hardwired (a legacy of our tribal past as Hayek has argued in Fatal Conceit) to immediately seek help from some saviour, God may be, government definitely (as a surrogate God?). And that's what makes Keynesian economics so appealing I think.
張貼者： Gary M C Shiu 於 5:24 PM No comments: 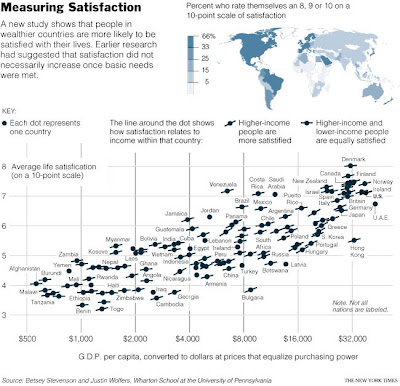 A reader asked me to recommend a couple of recent books on spontaneous order. To me, the term spontaneous order is a way to conceptualize the interaction of people in the market place according to some ground rules. If you accept that definition, all books explaining how market works are also books on the topic of spontaneous order.

Some of my recommendations are (they are all written for non-specialists):

2) The Mind of the Market

“We cannot change the cards we are dealt, just how we play the hand.”—Randy Pausch
For those of you who don't know Randy, you have to, watch this (HT to Kempton for the link).
After you have done doing that, get his book and read it, the book is entitled The Last Lecture.
張貼者： Gary M C Shiu 於 7:58 AM 1 comment:

The above line in English: Now to be a scholar and be a college graduate or a doctor is a small thing; the important thing is to be reasonable and be a good man (林語堂譯)

Come to think of it, how many parents in HK would rather have their kids become successful at school and at work than simply be a good man ?
張貼者： Gary M C Shiu 於 10:42 PM 1 comment:

My Sincere Thanks to WWW

While searching the net for some info, I stumble across a bio page of my former roommate/class mate back at graduate school. My old friend Mike Giberson, a fellow Masonomist. My previous impression was that Mike was a guy with few words.

Now not only is he in the consulting business, he is a contributor to two blogs on economics as well. Check him out for yourself here. BTW, he did his thesis under Nobel Lauerate Vernon Smith.
張貼者： Gary M C Shiu 於 6:12 AM No comments:

Economic Growth From a Smithian Lens

Dartmouth's Meir Kohn explains in this paper why, in order to enhance our understanding of economic change, we need to have a Smithian approach to economic growth instead of the standard Ricardian one.
張貼者： Gary M C Shiu 於 12:38 AM No comments:

Byron, The Global Economy Needs You

"Macroeconomics has taken a turn towards theory in the last 10-15 years. Most young macroeconomists are more comfortable with proving theorems than with getting their hands on any data or speculating on current events."

Byron, where are you just when the global economy needs you most?
張貼者： Gary M C Shiu 於 11:32 PM No comments: