In the US, that is. Here is the link in NYT. HT to Arnold Kling at the Econlog for the pointer.

BTW, the evidence of liberal bias in media is obvious in this line taken from the story:

The new rule is considerably more favorable to defendants.

Wondering what HK competition law's stance towards RPM would be, we would know soon.
張貼者： Gary M C Shiu 於 6:55 PM No comments: 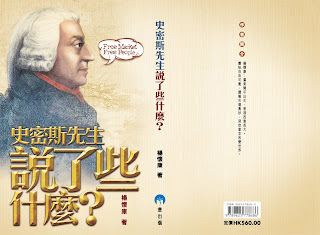 If you want to know what a combination of Hayekian and Cheungian approaches to economics would look like, get this book. You wouldn't be disappointed. The author of this work is Yeung Wai-hong, a classical liberal.

Sorry folks, the book is available in Chinese only. It should be available at bookstores, big and small, by now. Get it while stock lasts! Good reading.
張貼者： Gary M C Shiu 於 12:59 AM No comments:

In 2040, the Chinese economy will reach $123 trillion, or nearly three times the output of the entire globe in the year 2000, despite the influence of several potential political and economic constraints. India's economy will also continue to grow, although significant constraints (both political and economic) will keep it from reaching China's levels.

In his first inaugural address, Roosevelt spoke of a primary goal: "to put people to work." Unemployment stood at 20% in 1937, five years into the New Deal. As for the Dow, it did not come back to its 1929 level until the 1950s. International factors and monetary errors cannot entirely account for these abysmal showings...

At some points Roosevelt seemed to understand the need to counter deflation. But his method for doing so generated a whole new set of uncertainties. Roosevelt personally experimented with the currency -- one day, in bed, he raised the gold price by 21 cents. When Henry Morgenthau, who would shortly become Treasury Secretary, asked him why, Roosevelt said that "it's a lucky number, because it's three times seven."...

The most useful economic philosophy for understanding what went on is not Keynesianism. It is the public choice theory of James Buchanan and others, which says that government is a competitor that will annihilate what comes in its path.

Greg Ip at WSJ wrote that Bill White who works at the Bank of International Settlements in Basel is a fellow follower of Austrian Economics, more here. I disagree.

If you really want to learn what Austrian macroeconomics is all about, start here.
張貼者： Gary M C Shiu 於 8:08 AM No comments:

The Funniest Line I Have Read Today

Paris Hilton: "One Economics, Many Recipes is a fascinating read. It is the perfect book to keep me in touch with the real world during my stay at the L.A. county jail. I cannot imagine doing without it."

Best Line I have Read Today

"In theory, democracy is a bulwark against socially harmful policies, but in practice it gives them a safe harbor."

That is from Bryan Caplan's brilliant book, The Myth of the Rational Voter.

Here is a review of the book from the Economist magazine.
張貼者： Gary M C Shiu 於 6:32 PM No comments:

Justice Stevens, writing for the majority, simply relied on the age of the relevant precedents: "It is far too late in the history of our antitrust jurisprudence to question the proposition that certain tying arrangements pose an acceptable risk of stifling competition and are therefore unreasonable per se."

To an economist, this echoes the medieval preference for Aristotle over experiment based on Aristotle's antiquity.

That is from Richard Schmalensee's Thoughts on the Chicago Legacy in the U.S. Antitrust.
Richard is of course the Dean of MIT's Sloan School of Management.

Here is Richard's new book coauthored with David Evans. I got it at HK's Commercial Press bookstore in Causeway.
張貼者： Gary M C Shiu 於 1:50 AM No comments:

A New Look at Financial Globalisation

Four heavy weights combine efforts in tackling the issue of financial globalization. The site where this commentary is posted is a new one called Vox, where a bunch of European economists contribute. HT to David Warsh for the pointer.

Some new insights from the piece:

The notion that financial globalisation influences growth mainly through indirect channels has powerful implications for an empirical analysis of its benefits. Building institutions, enhancing market discipline, and deepening the financial sector take time, as does the realisation of growth benefits from such channels. This may explain why, over relatively short periods, it seems much easier to detect the costs but not the benefits of financial globalisation. More fundamentally, even at long horizons, it may be difficult to detect the productivity-enhancing benefits of financial globalisation in empirical work if one includes structural, institutional, and macroeconomic policy variables in cross-country regressions that attempt to explain growth. After all, it is through these very channels that financial integration generates growth benefits.

There is, however, unlikely to be a uniform approach to opening the capital account that will work well for all countries.

Peter McMillan up at HK Competition Law brings my attention to a submission made by the HK Law Society in response to the government's consultation on whether HK needs a competition law conducted earlier.

I am particularly disturbed by the writer's lack of understanding of basic industrial organization theory. For example, the author argued that the MTR and KCR merger is OK although it would reduce competition after the merger as long as lower prices are expected post merger.

1) first of all, let's get the facts right. MTR (HK's underground railway) and KCR are pretty much STATE-OWNED ENTERPRISE though the former has a bit of shares listed on the HK stock exchange. Check this out. The government own's over 75% of the listed MTR and the KCR is a plain vanilla SOE, period.

So the reason why you get lower prices after merger (which reduces competition) is that it is a political decision, not an economic one.

2) Failing to see this, the author, or whoever is writing the submission for the Law Society, misapplied the efficency argument as espoused by UC Berkeley economist and one of the pioneer of the New Institution Economics Oliver Williamson which claims that sometimes merger which reduces competition might be a good thing because of improved production efficiency (an increase in producer surplus if you really insist on technical jargon). But the Willamsonian tradeoff as it is known in the literature does entail a RISE IN PRICES, NOT LOWERED ONES post merger. Otherwise, there wouldn't be a tradeoff, wouldn't it?

The bottomline of the Williamsonian tradeoff is that merger which reduces competition should be allowed as long as the loss in the consumer welfare post merger is offse by efficiency savings in production costs.

3) More ridiculous and laughable is that the author actually used the MTR-KCR merger as sort of a JUSTIFICATOIN for the anti-competitive nature of the lawyers club!
張貼者： Gary M C Shiu 於 2:57 AM No comments:

Book Promo for My Mentor

My thesis advisor Richard Wagner, Harris professor of economics at George Mason University, has a new book out called Fiscal Sociology and the Theory of Public Finance.

The preface and chapter one are available here.
張貼者： Gary M C Shiu 於 1:56 AM No comments:

Amazing Scientific Fact of the Day

"According to Mr. Bland, aircraft manufacturers have been collecting data since the 1970s to determine the maximum stress that planes experience in turbulence, and they then design aircraft to withstand one and a half times that. In fact, a video clip available on YouTube shows Boeing’s test of the wing of a 777; using cables, the wing is bent upward about 24 feet at the tip before it breaks."

That's from a NYT story for those who have to step on the plane a lot.
張貼者： Gary M C Shiu 於 1:40 AM No comments:

Lant Pritchett said yes, here is a profile of Lant in NYT. Lant was with the World Bank before joining Harvard. HT to Marginal Revolution for the pointer.

Here's Lant's latest book Let Their People Come covered in the NYT story. In the eyes of Larry Summers, the "book may be like Milton Friedman's "Capitalism and Freedom,"which seemed "lunatic in the moment" but won converts with time".
張貼者： Gary M C Shiu 於 12:37 AM No comments:

Wu Bangguo, head of National People's Congress (China's legislature) made a few remarks on the relationship between the central government and HK Special Administrative Region the other day. See this story here.

Former Chief Secretary for Administration Anson Chan warned that if the central goverment and the HK government are not going to come out to clarify whether Wu's remarks imply that Beijing is having a rethink on HK's judiciary independence, this might have adversely affect investors' confidence HK. Read more here.

If I understand Anson's logic correctly, she is trying to argue that investors would likely leave HK or at least not increase their investments here if we don't have judiciary independence any more.

If that were true, you would expect say democratic India to have far more FDI than say our motherland China then. The reality is that, China, a place where judiciary independence is at best a work in progress, is a FDI magnet and China's FDI flows dwarf those of India's. See the relevant charts here.
張貼者： Gary M C Shiu 於 1:05 AM 1 comment:

The economics profession lost another star on 21 May 2007. Ken Sokoloff, an economic historian at UCLA passed away on that day. Here's an obituary at NYT, here's David Warsh's take on what happens to UCLA economics department using Ken's death as the lead. Here is more background info on Ken.

Ken at least has one Chinese student, his name is Zhou Qiren (周其仁)who is now a professor of economics at Peking University. Ken served as his Ph.D. thesis adviser together with retired UCLA Chinese historian Philip Huang.
張貼者： Gary M C Shiu 於 10:31 PM No comments:

According to Ed Prescott, Nobel Prize winner in economics:

"Dr Prescott compared Hong Kong's lack of an effective competition policy to the US economic experience in the 1930s. He said deliberate cartelisation in the US "was about the only candidate we have for what led to the Great Depression".

Dr Prescott said the introduction of an anti-trust policy in 1939 helped lead to the pre-second world war boom in the US economy.

Cartelisation, the main culprit of the great depression!? And antitrust law helped save the day for the US economy!?

Wondering what Milton Friedman would say about Ed's remarks. But then what do you expect, Ed is a real business cycle guy.

Yo, pro, then would you please explain what is so special about HK which makes it avert depression like what happened in the US in the 1930 without a competition law? And what account for its economic prosperity in the past decades instead of stagnation as suggested by you which would accompany a place without a competition law?
張貼者： Gary M C Shiu 於 9:45 PM No comments:

More Reading for this Summer

(1) A History of the Theory of Investment.

(3) Just in case you like to read more stuff by Jeff Sachs on development, get this.

(4) For those who are interested in antitrust, this probably is indispensable.

(5) Want to have fun with basic introductory economics? Get this then. John Lott was a student of Armen Alchian at UCLA. For those who are not familiar with John's work, John has written an excellent book some time ago on why theories of predatory pricing are not supported by facts, get it here.
張貼者： Gary M C Shiu 於 6:07 PM No comments:

One can certainly get a sense of the importance of China in US foreign policy by the amount of attention and resources think-tanks in DC devoted on China-related issues.

Here is the website of the China Balance-Sheet project.
張貼者： Gary M C Shiu 於 1:02 AM No comments: