Just when you think Freakonomics is freaky enough, the authors of Freakonomics have a new book due out later this year which guarantess to freak you out more. It is called Superfreakonomics.

The publisher's page for the book is here.
張貼者： Gary M C Shiu 於 1:47 AM No comments:

Back in 2008, Nobel Prize winner Ed Phelps delivered a lecture on Hayek in Vienna!

Economic theory tells us that the presence of competition renders it impossible for exploitation to occur. As Professor Steven N S Cheung said in his latest column:

七十多年前英国的鲁宾逊夫人（Mrs. Joan Robinson）推出雇主剥削劳工的可能性，但只可以在缺乏雇主竞争的情况下出现。 (Gary's translation: Seven decades ago, Mrs J Robinson pointed out the possibility of labor exploitation in the absence of competition among employers)

Intense competition among firms should be one of the main characteristics of a Hong Kong's free market economy. If that is the case, there should not be exploitation. And if there is no exploitation, why the government is rushing to introduce minimum wage? Something is seriously wrong here.
張貼者： Gary M C Shiu 於 6:46 AM No comments:

Economists Have No Clothes 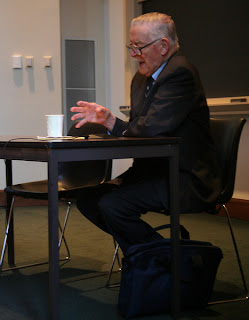 No, I did not say that. Apparently the title of this post is the paper title of a paper Jim Buchanan delivered at a recent History of Economic Thought Conference in Richmond.
According to a brief write-up of Buchanan's presentation, this is what he said:
“Economists have been parading around, really very naked, walking around in space,” Buchanan said. “It’s time to recognize that.”
More here. The shot up top is a picture of Jimmy in action at that same conference.
張貼者： Gary M C Shiu 於 2:54 AM No comments:

Lin wrote in this piece that small banks are good for developing economies, Cowen is reluctant to endorse Lin's view.

The gist of Cowen's argument is this:

But what if those institutions (Gary's note: big banks) start to arise naturally, from market forces, as indeed they will at some point? Should they be discouraged or shut down or somehow taxed at disproportionate rates?
張貼者： Gary M C Shiu 於 7:20 PM 2 comments:

Are You a Free Market Supporter? A Self-test

Question: Do you think the government should support businesses or the free market?

The answer can be find in this book, and this is a recent profile of one of the authors the book. And yes he is from Chicago's Business School.
張貼者： Gary M C Shiu 於 6:34 PM No comments:

Hong Kong's legislators would soon vote on whether to allow the government to convert its loans to the territory's Micky Land into equity according to this story.

What amazes me is the kind of argument that has been used to support the construction of Mickey Land in the first place and now its extension. The argument for building Micky Land, as least as it appears to me, is the following:

1. Build it (means Micky Land) first, and visitors would come!

Couple of years down the road, not that many visitors show up, the argument for extension relies on this:

2. Not that many people turn up because the park is too small. Build a larger park and visitors would come.

Amazing indeed. My sense is that if the whole enterprise is fully funded by the parent company of the local Micky Land, it would have been shut down a while ago. Amen.
張貼者： Gary M C Shiu 於 7:04 PM No comments:

HK is slated to introduce its plastic bag charge at retail outlets starting tomorrow. Here is the story.

What interests me is whether, with a fixed charge of 50 cents per bag, and say if you are contemplating to buy just one item(suppose you need a bag for this, otherwise the constriant is not binding anyway), a customer would pick a relatively more expensive item than he or she would without the plastic bag charge. The reason for this is that the relative price of the more expensive item should fall with the introduction of the plastic bag charge.

I do not invent this line of analysis of course, this is only one application of the Alchain-Allen Theorem.
張貼者： Gary M C Shiu 於 7:22 PM No comments:

In my last post here, I explained why overconsumption is a problematic concept.

But there is a deeper conceptual issue here. One that goes to the heart of traditoinal welfare economics. It is the presumed existence of a social planner whose objective function embodies the interests of all members of the society. In other words, the social planner chooses the best course of action which maximizes the society's welfare function. Think about this. Other than implicitly assuming that there is an alternative, optimal consumption pattern which maximizes the welfare of society, how could one lament that the actual pattern of consumption involves over-consumption?

But this way of looking at the problem of overconsumption is wrong headed as Jim Buchanan long pointed out in the 1950s. There is no such social planner. To think there is is to commit the error of the fallacy of composition, that if at the individual level, the chooser picks among alternative choices within constraints, then this must also be true for the society as a whole.

There is another way to think about overconsumption and that relates to incentives. And that is the modern way of thinking about over-consumption. Individuals' might under-consume or over-consume if the consumption of a good generates externalities. (Over-consumption if the externalities are negative and vice-versa) Obesity is a good example. A lot of people lament that more and more people are eating too much resulting in a rising number of obese adults (or even children). The lament usually follows with the complaint that public health resources are being diverted and re-allocated to cure illnesses that are caused by obesity, implicitly ranking those other uses the public health resources are previouly devoted higher than the current ones (used in curing illnesses which result from obesity). In this sense one can then conclude that when people make consumption decisions, they do not take into account the consequences of resources being redirected to cure illnesses resulting from their decisions. Over-consumption thus results.

But let's think beyond this stage. Why I do not take those health consequences into account when I make my consumption decision? Is it because public health services are offered by the government? How can one fail to incorporate such negative health consequences resulting from over-eating if one were to shoulder all medical expenses?

From this perspective, over-eating can only occur with the backdrop of a particular institutional set up, here a public health care system. And if the health care system is privately provided, over-eating stops to be a problem. In other words, in the second way to look at over-consumption as an incentive problem, whether the claim makes sense or not depends on the institutional set up within which individuals make decisions. With private health care, individuals internalize the health consequences of their eating decisions, and over-eating as one manifestation of the phenomenon of over-consumption becomes irrelevant as a public policy problem.
張貼者： Gary M C Shiu 於 7:21 PM No comments:

I am half way through Justin Fox's excellent book on the development of the idea of efficient financial market "The Myth of the Rational Market."

"Galbraith(Gary's note: he is referring to Harvard economist John Galbraith)...likened American corporate executives to Soviet apparatchiks: the bureaucratic administrators of a vast system geared toward overconsumption and waste."

Galbraith of couse is concerned about the bigness of some American enterprises. But it is totally wrong-headed to compare such large corporations in the US with those giant sized SOEs found in the former Soviet Union. To see where Galbraith went wrong, just think that the size of a firm in the US is a result of competition, not imposed from above as some divine order by the planners at the top of the Soviet government. To miss this point leads one to question Galbraith's understanding of basic economics.

More generally, the Institutionalists of which Galbraith belong worry that economic theory which has been built upon a period where firm sizes are small would not be applicable to a situation where firm sizes are large. So they are worry about the divergeent of interests between managers and shareholders. True. But if they just go a step further, based upon the economic theory the applicability of which they questioned, they should see the conflict between managers and shareholders also implies an opportunity for someone to figure out a profitable way to resolve such conflict. There is a five dollar bill on the sidewalk as they say. Indeed, the emergence of the market for corporate control and institutional investors where shares of publicly listed firms are once again concentrated in a few hands are attempts to resolve such conflict in a profitable manner.

I have always found the attack on capitalism for its encouragement of over-consumption puzzling?

Who set the dividing line beyond which consumption becomes excessive? God? Or John Galbraith or some other government official? And what's wrong with over consumption? If the person in question places a higher value on the stuff he or she consumes than the rest of the society, what's wrong if her or his consumption level exceeds the dividing line? Of course, I realize there are a lot of objectives other than attaining the best use of resources, but those ain't and should not be part of the research focus of economists in my humble opinion.
張貼者： Gary M C Shiu 於 5:50 PM 1 comment: